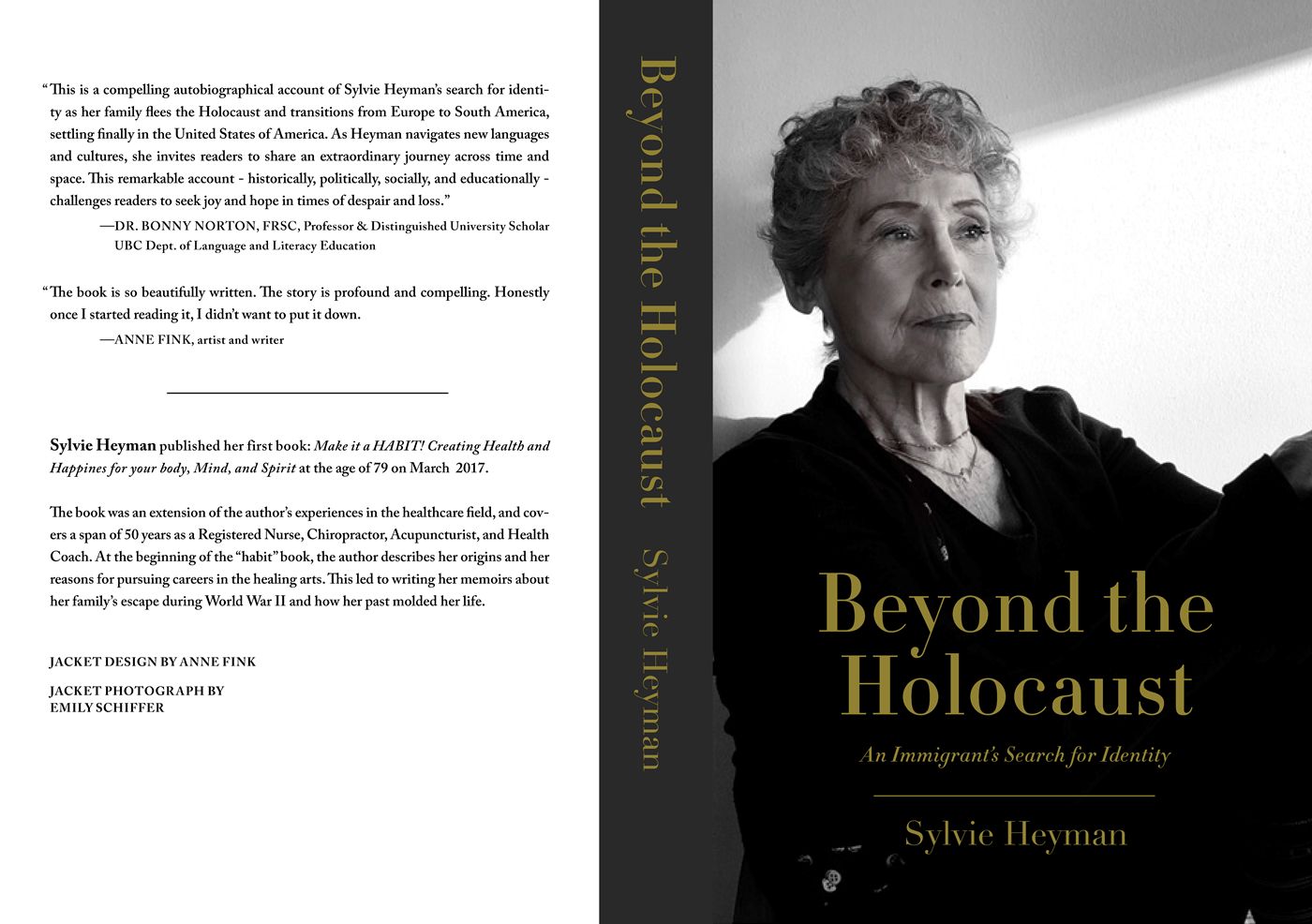 Beyond the Holocaust: An Immigrant’s Search for Identity is Sylvie Heyman’s personal narrative as a refugee, with her family, from Europe during World War II. It chronicles their journey to Brazil, the harrowing experiences as they were smuggled to Argentina, the challenges faced in those dictatorship countries, and the final immigration to the United States of America when the author was a teenager.
In the second part of the book, the author blends her personal experiences with scholarly theories about language, nationality, and identity to better understand the long-term struggles and challenges that immigrants face.

Sylvie Heyman published her first book: Make it a HABIT! Creating Health and Happiness for your Body, Mind, and Spirit at the age of 79 in March 2017. The book was an extension of the author’s experiences in the healthcare field and covers a span of 50 years as a Registered Nurse, Chiropractor, Acupuncturist, and Health Coach. At the beginning of the “habit” book, the author describes her origins and her reasons for pursuing careers in the healing arts. This led to writing her memoirs about her family’s escape during World War II and how her past molded her life.

In Episode 116, I have the pleasure of conversing with Sylvie Heyman, the author of “Make it a HABIT” and “Beyond the Holocaust: An Immigrant’s Search for Identity”. She is a survivor of World War II . She started her career as a registered nurse specializing in obstetrics and later on, heading the cardiac operating room at St. Francis Hospital in Roslyn, NY, as an educator and administrator. Since then she was an acupuncturist and chiropractor and currently is a Certified Health Coach, focusing on five habits Habits of Health: healthy weight, healthy diet, healthy physical activities, healthy sleep, and healthy mindset.

We speak about her 2 books, a preview of her upcoming 3rd book, the differences of surviving the Holocaust and World War II, her experiences in the health world, accountability, benefits of chess, and more.

National Master Evan Rabin, CEO of Premier Chess · 116th Episode with Dr. Sylvie Heyman, Author of “Make it a HABIT” and “Beyond the Holocaust”

Imagine having to uproot your life and move to an entirely different place where you aren’t familiar with the language, people, or culture. Now, imagine going through this experience while also dealing with the challenges of being a teenager. This was the reality for Dr. Sylvie Heyman, the author of Beyond the Holocaust: An Immigrant’s Search for Identity.

Allan Rolnick of The Tax Resolution Ninja Show interview Dr. Sylvie Heyman about her book, Beyond the Holocaust: An Immigrant’s Search for Identity. Tune in as Dr. Heyman talks about her family’s journey to the U.S. when she was just 14 years old, the struggles they faced in adapting to life in a new country, the importance of understanding the immigrant experience, and why she felt encouraged to tell her story.

Host Cyrus Webb welcomes author Sylvie Heyman to #ConversationsLIVE to discuss her book Beyond the Holocaust: An Immigrant’s Search for Identity.

A Unique Perspective Into the Immigrant Experience

"What an exercise in courage! Dr. Heyman plumbs the depths of her emotional life in order that we gain a better understanding of what it means to be an immigrant as a child, a teen, and as an adult. Peeling back the layers of her experience and that of her family against the backdrop of the horrors of war and the brutality of dictatorships is artfully done in this memoir. Interspersed with valuable data and anecdotes, it's a riveting look into the life of a woman who lives in gratitude and continues to positively impact the lives of everyone she encounters both personally and professionally."

"Heyman's book is a powerful narrative of the refugee and Holocaust experiences. It is a compelling and insightful reflection of her family's journey. "

Rabbi Lee T. Bycel    Served on the Board of the U.S. Holocaust Museum and Committee on Conscience 2014-2019.
Heartfelt + Thoughtful Read

"Sylvie does a great job of describing not only the process of escaping the Nazis, but also how it emotionally impacted her life. It's important for us to remember that there is a difference between a survivor and a refugee, and Sylvie talks about the distinction + her guilt from being a refugee. Would recommend it!"

"I congratulate you for your courage to reveal so much of your private feelings in public. I am glad you did. My grandmother came to this country when she was 19 years old. We were very close. My in-laws were also immigrant teenagers. Your book gave me some insight and empathy about what they experienced. I was especially interested in your comments re the mysterious dynamics of language. Thoughts about the psychological nuances of language have been a fascination to me. Good luck to you. "

"What a compelling, touching and courageous story of the Holocaust’s impact on a woman searching for identity as an immigrant. In Beyond the Holocaust, Sylvie Heyman takes us on an arduous journey with her parents, as they travel from Europe to South America looking for refuge and a place to call home. I was continually drawn in by her fears, confusion, longing and desire for acceptance. Throughout the book, I wanted to hold Sylvie in my arms and comfort her. Not only did she find her way, she thrived. Now she offers solace to other immigrants struggling on their own paths. What a timely and inspiring autobiography. I ordered five copies to share her journey with others."